The above autographed photo of actress Leonora Ruffo was originally printed in Grand Hotel issue No. 1101 (published July 29, 1967).


The strikingly beautiful Leonora Ruffo was born in Rome on January 13, 1935 as Bruna Bovi, and would go on to enjoy a very successful film career in the 1950s and early 1960s.

Leonora was only 16 years old when she began her acting career in 1951. She first started out appearing in fotoromanzi (photo-novels) under the Swedish-sounding pseudonym Ingrid Swenson, and experienced notable success with her leading role in the photo-novel Il giardino di Allah (published in the magazine Cine Illustrato), which was a photo-novel-remake of the Hollywood film The Garden of Allah (1936) with Marlene Dietrich. Soon afterwards, Leonora was discovered by peplum and adventure movie specialist Pietro Francisci (best known as the director of the original Hercules), who cast her in the female lead in his adventure film Wonderful Adventures of Guerrin Mescino (1951). Impressed by her performance, Francisci awarded Leonora the title role his the next film, the Biblical costume spectacle The Queen of Sheba (1952).

Throughout the rest of the 1950s, Leonora Ruffo's career blossomed and she worked with some of Italy's most important directors - appearing for Federico Fellini in I vitelloni (1953), and for Dino Risi in The Widower (1959). But she also appeared in genre cinema, and during the early 1960s, Leonora was the leading lady in three excellent sword and sandal adventures: Vittorio Cottafavi's Goliath and the Dragon (1960), Sergio Corbucci's Goliath and the Vampires (1961) and Mario Bava's Hercules at the Center of the Earth (1961).

But after 1961, Leonora Ruffo abruptly stopped making movies. She did not retire completely, however, as she continued to play occasional leading roles in photo-novels published in Grand Hotel. This part of her career appears to be completely forgotten today, even though several of the photo-novels she starred in are quite interesting. Most notably, she played historical figures such as Catherine the Great in La grande Caterina (published in Grand Hotel during 1964) and Queen Christina of Sweden in La regina Cristina (published from 1965 to 1966 in Grand Hotel).

After a five year break from cinema, Leonora's old friend Pietro Francisci helped her make a comeback by casting her in his cheesy science fiction film Star Pilot (1966). Leonora plays the starring role of a wicked alien woman and she does a superb job - managing to really make this weird space opera enjoyable to watch. But, sadly, her comeback was to be short-lived. Her next film, the spaghetti western Tequila Joe (1968), would offer Leonora the last substantial role of her career. After that she made one final film appearance - an uncredited cameo in Fernando Di Leo's erotic drama Burn, Boy, Burn! (1969). Leonora then abandoned the limelight for good, and was not written about in media again until her death on May 28, 2007 - at the age of 72.

I've always thought it was a great shame that Leonora chose to retire so prematurely, because she was a very good actress and a radiant beauty whose eyes were absolutely mesmerizing. One wonders what direction her career had taken had she stuck around during the 1970s...


Anyway, here are a few pictures to remember the lovely Leonora Ruffo by: 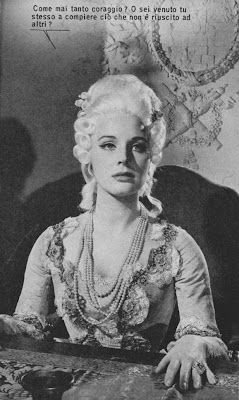 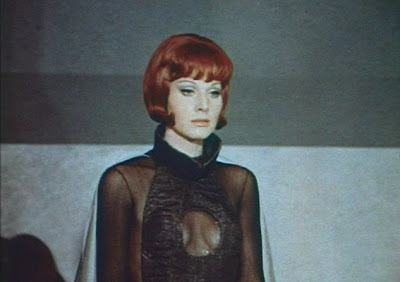 Leonora in top form as an alien villainess in Star Pilot 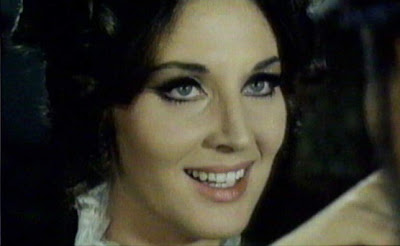 Leonora - still at the hight of her beauty - in Tequila Joe

Thank you very much for the kind and encouraging words! Very much appreciated. I see that you have a very interesting blog as well! :)