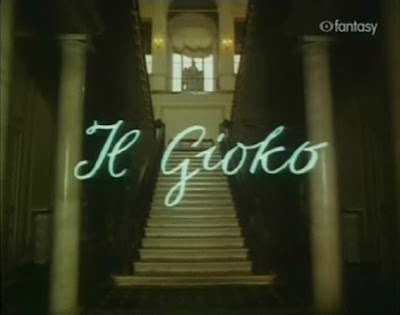 In 1987, when the Italian horror movie industry was dying a slow death, director Lamberto Bava struck a deal with production company Reteitalia to produce a quartet of horror movies for Italian television. The four movies were: Graveyard Disturbance (1987), Until Death (1987), Dinner With a Vampire (1988) and The Ogre (1988), and the package went under the series title Brivido Giallo. Although most of these films are fairly toothless "kiddie horror" efforts aimed at younger audiences, they nevertheless did very well in Italy and were also successfully distributed in English-speaking territories. In fact, the whole project was so successful for Reteitalia that in 1989, Bava was assigned the task of directing another quartet of TV horror movies – this time under the series title Alta Tensione (or High Tension in English). The four movies in this package are: The Prince of Terror, The Man Who Didn’t Want to Die, Eyewitness and School of Fear. Interestingly, this second quartet of tele-thrillers is quite different from the first. One of the more noticeable characteristics of the High Tension films is that unlike their predecessors they seem to have been aimed at a more mature audience – and this is particularly true of School of Fear.

The plot takes place at the renowned Giacomo Stuz private school, and begins with a creepy scene set during a stormy night with heavy rain and lightning. A terrified young girl is lurking through the dark basement of the school – looking for a way out. She tries climbing her way out through a shaft but her escape is blocked by a solid iron grid and her desperate cries for help are drowned by the pouring rain and crashing lightning. 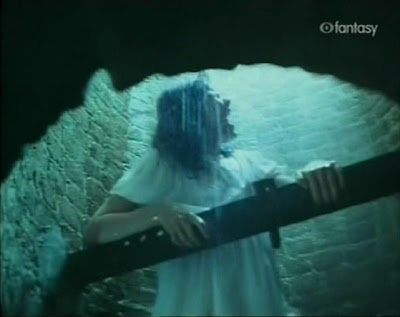 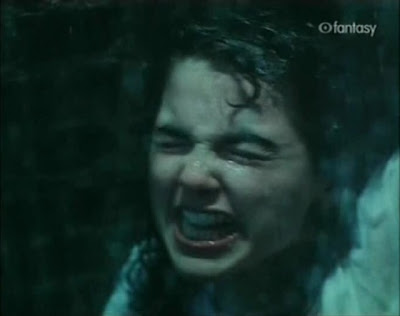 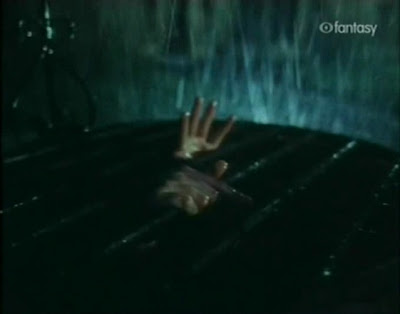 
Cut to sometime later when the beautiful, young schoolteacher Diana Berti (Alessandra Acciai) arrives at the Giacomo Stuz school for her first day of teaching. Unfortunately, Diana gets a rougher time than expected at the school: she is frightened by the hostile caretaker’s deformed son, who lurks around and spies from shadowy corners, and gets reprimanded by the headmistress (Daria Nicolodi), who disapproves of Diana’s mini-skirt and advises her to dress more conservatively. 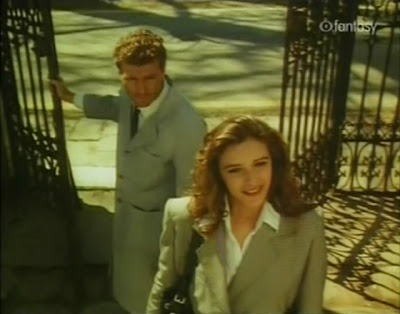 Diana arrives at the school of fear... 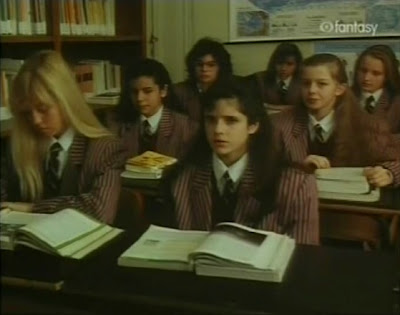 ...and meets the schoolchildren


It also turns out that the schoolchildren are playing a mysterious “game” that they keep hidden from the adults. Diana soon starts to get concerned about this secretive game – especially when she reads an essay in which one of the schoolgirls, Roberta (Viola Simoncioni), writes about being afraid of the game. The essay was written to the children’s previous teacher, a certain Mrs. Curiel, and Diana decides to have a little chat with her. But when she asks about how to reach her predecessor, the headmistress reluctantly tells Diana that Mrs. Curiel is dead. In fact, she died rather mysteriously one night at the school when she apparently fell out the classroom window and was impaled on the spiked iron gate below. What she was doing at the school in the middle of the night and how she managed to fall remains a mystery. And this isn’t the only dark cloud from the school’s past – there’s also the matter of one of the schoolgirls who was kidnapped and never recovered. “Naturally, it had nothing to do with our school”, the headmistress is awfully quick to point out. 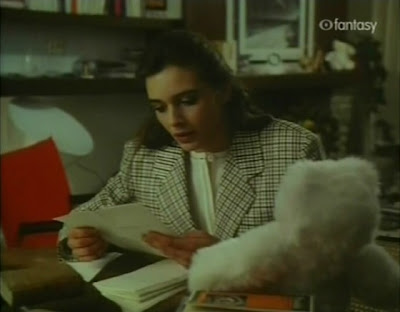 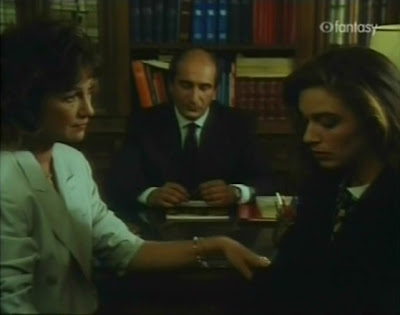 The headmistress tries to put Diana's worries to rest


Things become even more sinister when Diana turns on the TV and sees herself on the screen getting killed – impaled on the school’s iron gate just like poor Mrs. Curiel! The next day at school, a student named Anna (Morena Turchi) is inexplicably missing. Everyone seems to assume she has gone on holiday with her parents, and no one except Diana finds it strange that the school hasn’t been notified about this. Diana is convinced that the children and their mysterious “game” are responsible for the death of Mrs. Curiel and the disappearance of Anna, and she fears that she might be next on their list. But neither the headmistress nor Diana’s new love interest, Mark Anselmi (Jean Hebert) – who is conveniently a police inspector – seem to believe in her suspicions... 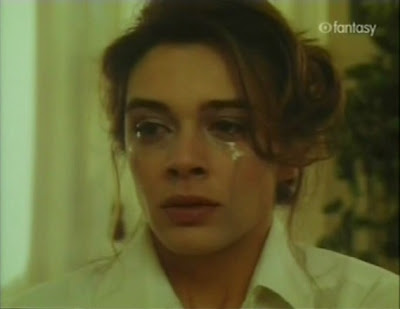 Diana starts to get paranoid

With School of Fear, Lamberto Bava has come up with an odd little chiller that goes for a different approach than expected. The opening sequence where a frightened young girl tries to escape from the school effectively establishes a chilling atmosphere, and the subsequent introduction of Daria Nicolodi as the headmistress who suspiciously avoids all talk of mysterious deaths and kidnappings raises expectations of a Suspiria-style plot with villainous teachers bumping off unfortunate students. But in a very welcome twist, famed horror movie screenwriter Dardano Sacchetti and co-writers Roberto Gandus and Giorgio Stegani skew our expectations and head in a completely different direction – making the young schoolchildren the villains of the piece. Fortunately, the writers avoid drawing upon the bland Children of the Corn (1984) for inspiration, and instead approach the subject matter as a psychological thriller in the spirit of Polanski’s excellent The Tenant (1976). The viewers are never completely sure about whether or not Diana’s suspicions towards the children are actually justified, and this is one of the film’s greatest strengths.

Luckily, Lamberto Bava compliments the script’s maturity and directs with surprising restraint – dropping the expected bloodshed and instead focusing his efforts on the psychological thrills and chills. That’s not to say that School of Fear doesn’t have its share of more classic horror moments, though, because it certainly does. The opening sequence with the frightened young girl is particularly creepy and very atmospherically shot, and various scenes of Diana exploring the large and seemingly empty school building are quite well-handled too. Not to mention the freaky flashbacks to Diana’s childhood trauma, which are definitely memorable. Gianfranco Transunto (who shot most of Bava’s TV movies) delivers some very stylish cinematography and he photographs the large, old and sinister-looking school to eerie effect. Aiding the visuals is a solid musical score by Simon Boswell, which is quite chilling and very fitting for the atmosphere of the film. 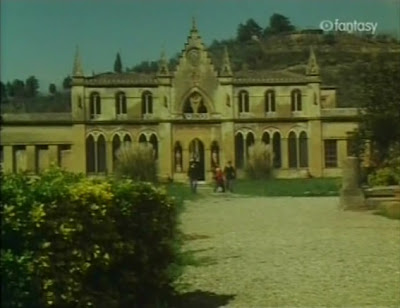 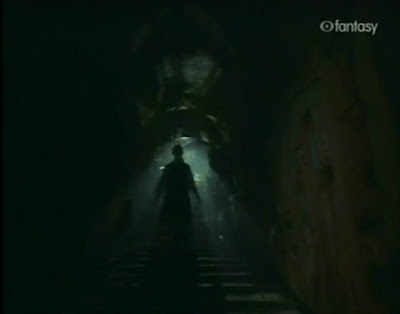 Gianfranco Trasunto's stylish cinematography is a great asset to the film


The only really familiar face in the cast is horror legend Daria Nicolodi in the role of the conservative headmistress whose only concern is to maintain the good name and reputation of the school. While I wish that her role had been a tad more substantial, Nicolodi is an accomplished actress who is capable of delivering the goods in both big and small roles and she does not disappoint this time either. She’s very believable in the part and brings a touch of class and elegance to the proceedings. Leading lady Alessandra Acciai (who played a supporting role in Luigi Cozzi’s god-awful The Black Cat the same year) may not be the world’s most brilliant actress but she acquits herself well and is both sweet and likable. None of the other actors are given too much to do but they all deliver adequate work – including the child actors.

School of Fear is not without its flaws, however, as there are a couple of disruptive elements that don’t serve much purpose in the film, such as the deformed child of the school’s caretaker. The film is also quite generously paced – perhaps a tad too much at times. Normally I don’t have any problems with films that are deliberately slow-paced as long as the denouement it carefully builds up to pays off. Unfortunately, School of Fear fails to deliver a fully satisfactory pay-off, and this is without doubt its most serious flaw. It’s not that the ending is downright terrible, mind you; but it does fall somewhat short of delivering the necessary punch that the film has slowly been building towards for 90 minutes – especially on the first viewing. 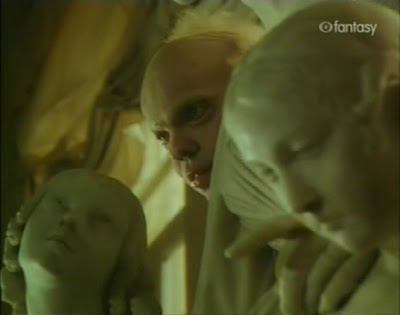 
In short, School of Fear isn’t entirely successful but it’s an interesting little psychological thriller with some inspired ideas. It’s not a film for everyone’s taste and if you’re looking for another A Blade in the Dark (1983) or Demons (1985), you might be disappointed. But if, on the other hand, you are among those who consider Macabre (1980) to be one of Bava’s better films, you might want to give this one a chance as you may very well come to like it.

A note about the availability of the High Tension films

Unfortunately, School of Fear (as well as the other three films in the High Tension series) is fairly tricky to get hold of. Whereas Bava’s first quartet of TV horror movies were very successful and sold well abroad, the High Tension movies did not fare as well. None of them were given TV screenings in Italy until in 1999 – ten years after they were first made. All four of them were dubbed into English but failed to attract buyers and have not received any sort of English-friendly release on either VHS or DVD. English-dubbed screener tapes with a non-removable ‘Not for commercial use’ text at the bottom of the screen were sent to potential buyers, though, and poor-quality bootlegs of these tapes are doing the rounds among collectors. This is not a very ideal way to watch the films, though. 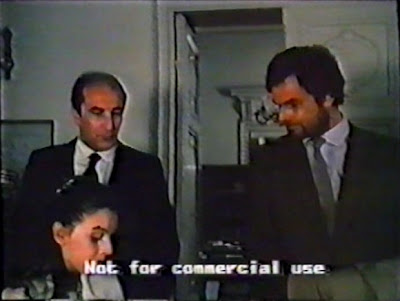 As you can see from this random screenshot, the screener version ain't too hot-looking


Recordings from Italian television broadcasts are also out there and they look a lot nicer but, alas, they’re in Italian only. Let’s hope someone decides to put out an English-friendly High Tension box-set someday. In the meantime, I have made due with watching a rip of an Italian TV broadcast with the soundtrack from the English screener tape. It worked well enough for my needs. 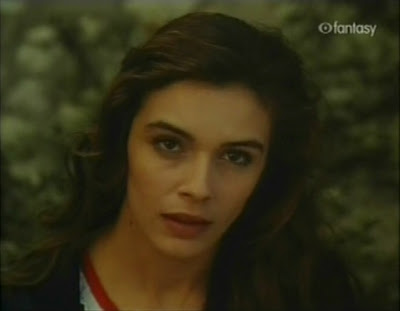 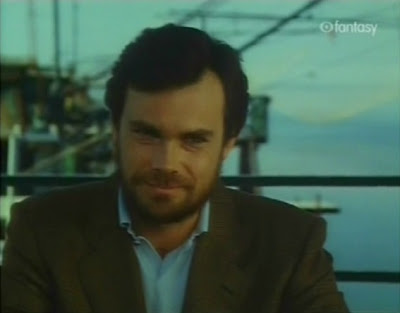 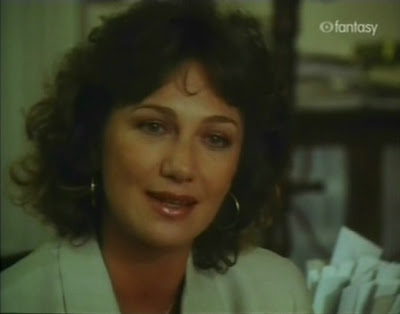 Daria Nicolodi as The Headmistress 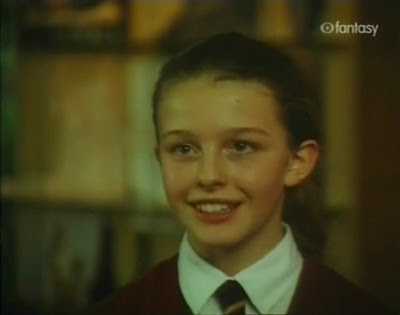 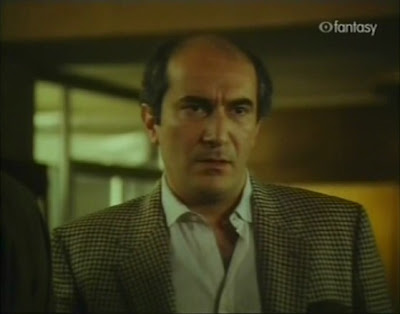 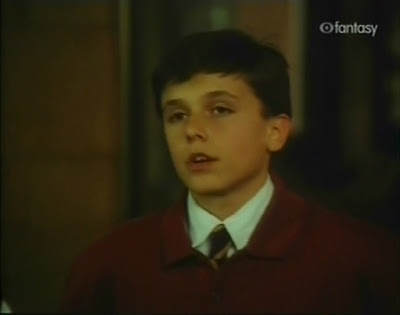 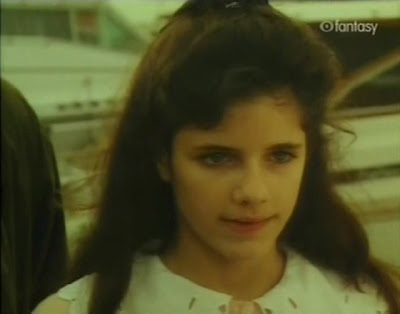 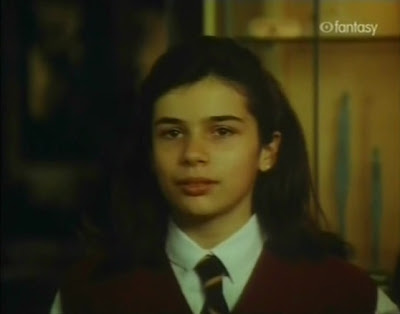 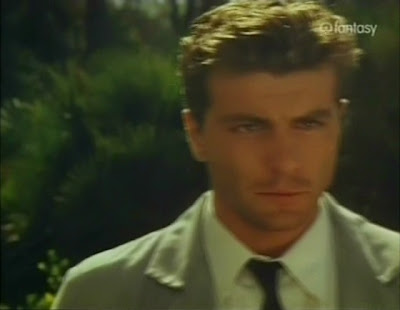 ??? as Alberto, the caretaker