During a busy Easter holiday there isn't as much time for films as I'd like to but I don't want to neglect this blog completely, so I scanned a new batch of prints ads featuring popular Euro actresses of the time.


Once again, Lux soap is a big favorite, and here we have a Lux ad from 1959 with Italy's most famous actress, Sophia Loren:

Interestingly, the next Lux ad (from 1963) features the beautiful Scilla Gabel, who had at one point in her career been a stand-in for Sophia Loren. But Gabel would go on to become a considerable star in her own right - appearing in such memorable projects as the excellent horror film Mill of the Stone Women (1960), the Robert Aldrich-directed all-star cast peplum Sodom and Gomorrah (1962), the screen version of Modesty Blaise (1966) and the esteemed television mini series The Odyssey (1968). Here's the print ad Scilla did for Lux: 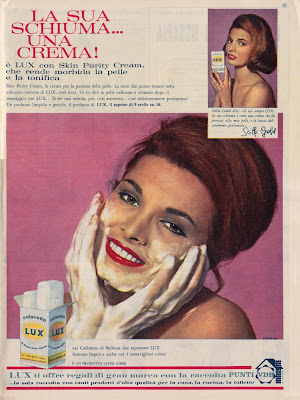 French actress Jacqueline Sassard was a popular film actress in both Italy and France the 1950s and 60s - popping up everything from serious films like Valerio Zurlini's acclaimed Violent Summer (1959) to Umberto Lenzi's Sandokan adventure The Pirates of Malaysia (1964), where she starred alongside Steve Reeves. After appearing in Claude Chabrol's Les biches (1968), she cut short her promising career and abruptly retired from acting, which might explain why she is largely forgotten about today. Below is an ad for Lux soap that Jacqueline Sassard did in 1964, when her career was still blossoming: 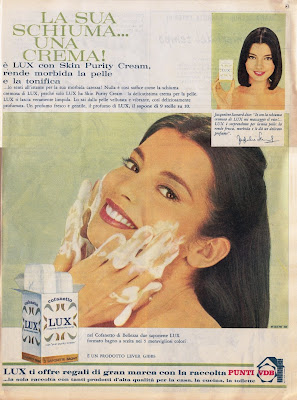 Flame-haired beauty Liana Orfei was the undisputed queen of Italian muscleman and swashbuckler adventures in the 1960s. In 1963, Liana did a series of print ads for Felce Azzurra make-up kits - two examples of which you can see below: 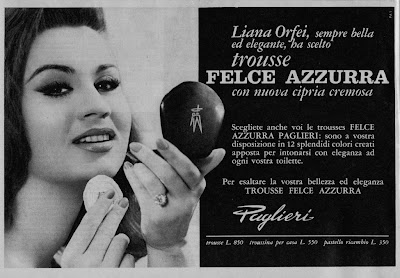 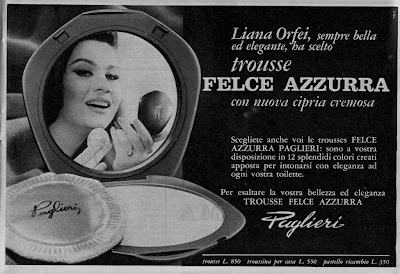 German actress Elke Sommer has been active since the late 1950s and is still going strong. She has enjoyed a hugely successful international career, so she was a natural candidate to endorse Lux soap in 1965: 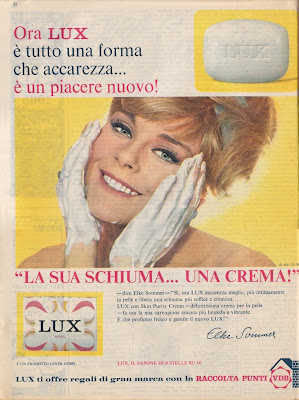 Okay, so Jane Fonda isn't really a Euro actress but she did star in Barbarella (1968) and that's good enough for me. Besides, this ad for Lux soap that she did in 1966 is Italian: