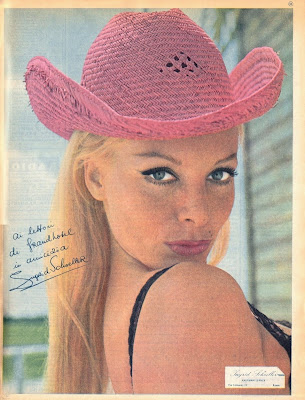 Finally! The Grand Hotel gallery returns - this time with an autographed photo of sexy German starlet Ingrid Schoeller. It was originally printed in Grand Hotel issue No. 1046 (published July 9, 1966).


A considerable star in her time, Ingrid Schoeller is one of all too many 1960s starlets who have since faded into obscurity. I haven't been able to find out too much about Ingrid's background, other than the fact that she was born in Munich in 1942. At some point she went to Italy to persue a career in acting, and she started appearing in films in the early 1960s. She made her debut with a supporting role in Duccio Tessari's adventure film The Titans (1962), and went on to appear in several comedies, including Lucio Fulci's spy spoof 002 - Those Most Secret Agents (1964), in which she appears alongside the legendary Italian comedic duo of Franco and Ciccio.

Ingrid's big breakthrough came in late 1964 - thanks to a stint on the TV show Napoli contro tutti (translation: Naples Against Everybody), a hugely successful music show in which a group of Neapolitan singers challenge famous singers from various world capitals. Originally, Elke Sommer was set to appear in an episode as both emcee and musical competitor but she fell ill at the last minute and had to be replaced. Her replacement was none other than Ingrid Schoeller, who stepped in on very short notice and really won over Italian television audiences with her charming personality and impressive singing. After this performance, everybody wanted a piece of Ingrid. She was quickly signed with Italian record company Durium and would go on to release several singles, such as "Ieri, domani", "Se passerai di qui" and "Se cerchi amore". Ingrid was also photographed for the "Girls of Germany" spread in the November 1964 issue of Playboy, and the following month she was chosen to guest star in an episode of the highly popular British spy series The Saint, starring Roger Moore.

With this newfound stardom, Ingrid's cinematic career blossomed and she was given the starring role in Umberto Lenzi's excellent Euro Spy adventure 008: Operation Exterminate (1965), in which Ingrid plays Agent 008, a sort of female James Bond. The film is notable for being the first to portray a female variant of James Bond and is a real starring vehicle for Ingrid, who not only plays the lead but also gets to perform the song "Good Bye to Cairo", which she co-wrote with the film's composer, Angelo Francesco Lavagnino.

Ingrid's popularity continued throughout the rest of the 1960s and her face graced the covers of countless magazines as she kept herself busy with singing, appearing in films and on television. She proved herself a versatile actress and managed to avoided being typecast as she swithced between playing sympathetic and unsympathetic characters - in both leading and supporting capacity. It's also impressive that she nearly always appeared in different kinds of genres: the comedy Ischia Love Operation (1966), the spaghetti western Son of Django (1967), the caper movie Mission Phantom (1967), the costume adventure The Son of the Black Eagle (1968), the gangster movie They Paid with Bullets (1969) etc.

Unfortunately, Ingrid's film career came to a very sudden end in 1969, and I have not been able to come up with any information about what became of her. According to reports in Variety magazine, she was supposed to appear in Demofilo Fidani's crime flick The Electric Chair (1969) but she dropped out of the project for reasons unknown. While Ingrid's cinematic career ended in 1969, it is very possible that her singing career continued into the 1970s. If anyone has any more concrete information about what happened to Ingrid, I'd love to hear it.


And, finally, here are some pictures to remember the beautiful and talented Ingrid by: 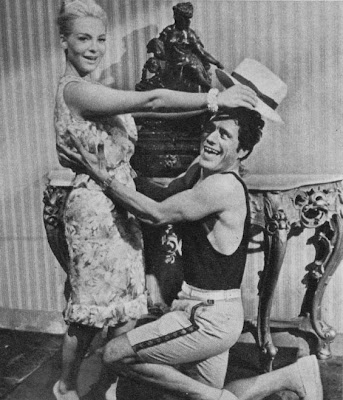 A funny picture of Ingrid and legendary comedian Franco Franchi 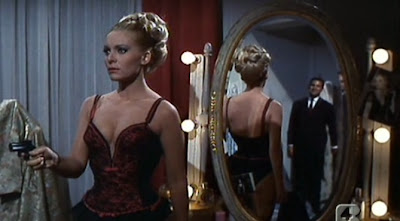 Ingrid as a female James Bond in 008: Operation Exterminate 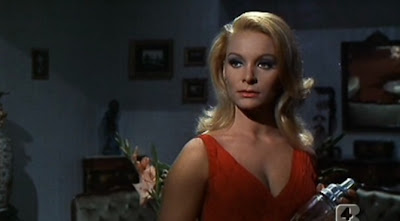 Another gorgeous shot from 008: Operation Exterminate 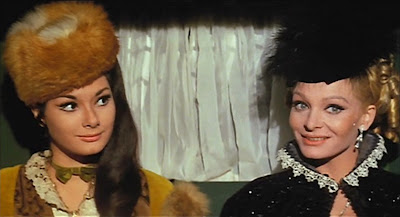