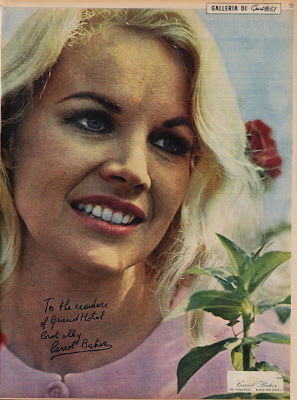 This autographed photo of Carroll Baker was originally published Grand Hotel issue No. 1078 from February 18, 1967.

Hollywood actress and later giallo staple Carroll Baker should be quite a familiar face to fans of Italian genre cinema. She was born on May 28, 1931 in Johnstown, Pennsylvania in the United States, and started her acting career in Hollywood in the early 1950s. Baker's breakthrough role was as the lead in Elia Kazan's controversial Baby Doll (1956), which earned her an Oscar nomination for best actress. Subsequently she appeared in a series of well-regarded Hollywood films including The Big Country (1958), How the West Was Won (1962), The Carpetbaggers (1964) and The Greatest Story Ever Told (1965).

In 1965, Baker starred in the film Harlow (1965), a biographical film about the life of 1930s movie star Jean Harlow which ended up being a critical and commercial failure. After this, Baker had a falling out with her studio, Paramount Pictures, who apparently had her blacklisted. Unable to get work in Hollywood, Baker relocated to Europe - more precisely to Italy, where she enjoyed great success as a leading lady for more than 10 years.

Her first big Italian hit was Romolo Guerrieri's classic giallo The Sweet Body of Deborah (1968), in which she starred alongside French hearttrob Jean Sorel. This highly successful film spawned several imitations and was considered somewhat of a succès de scandale due to several explicit (for its time) sex scenes between Baker and Sorel.

Carroll Baker and Jean Sorel as a very affectionate, newly wed couple in The Sweet Body of Deborah


After the great success with Deborah, Carroll Baker found herself being cast in a string of similarly twistful and sexy gialli - most notably four gialli directed by the great Umberto Lenzi: Paranoia (1969), So Sweet, So Perverse (1969), A Quiet Place to Kill (1970) and Knife of Ice (1972). But she also appeared in other gialli, including Osvaldo Civirani's The Devil With Seven Faces (1971), Eugenio Martin's The Fourth Victim (1971) and Gianfranco Piccioli's The Flower with the Deadly Sting (1973). Baker also dabbled in other genres - appearing the western Captain Apache (1971), the artsy horror film Baba Yaga (1973), and sex dramas such as The Body (1974), The Private Lesson (1975) and My Father's Wife (1976).

Umberto Lenzi's excellent giallo A Quiet Place to Kill reunited Baker with Jean Sorel, her co-star from The Sweet Body of Deborah


Carroll Baker eventually returned to America in the late 1970s and resumed her Hollywood career. Most of Baker's so-called serious fans tend to harshly dismiss her European films as "euro trash" but that just goes to show how clueless they are. Personally, I love the wonderful films Carroll Baker made in Italy - specially the gialli. They are a lot better than they are given credit for and will always have a special place in my heart.