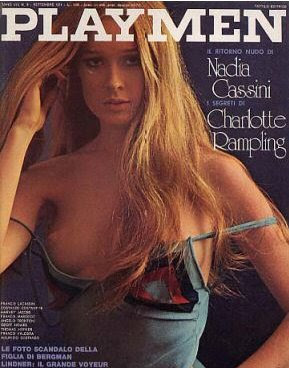 As we all know, American actress Camille Keaton had a career appearing in several Italian exploitation films before returning to America for her notorious performance in I Spit on Your Grave (1978).

Camille got her first big roles in Italian films in 1972, when she appeared in stuff like Decameron II, Tragic Ceremony and of course What Have You Done to Solange? She was also a Playmen centerfold that same year.

But did you know that she also appeared in two gialli directed by Umberto Lenzi? Yup, that's right. In 1971, before getting her big break, Camille was apparently a day player and served as a background actress in a couple of films.

If you look closely, you can spot her in Lenzi's An Ideal Place to Kill (1971) where she is one of the girls looking on during a tennis match early in the film. Actually, we don't even see all of her face but those eyes are unmistakable!

Camille can also be seen in Lenzi's Seven Blood-Stained Orchids (made in 1971 - released in 1972) as one of the hippie girls at Bruno Corazzari's apartment. She is seen lying on a bed with a boyfriend, and can also be glimpsed in the background later in this sequence.

I'm guessing she also did other tiny roles around the same time but I don't know of any specific examples. Yet...!
Lagt inn av Johan Melle kl. 13:09

It was her eyes that made me recognize her - they are very special I think.

Here's a very informative Italian interview with Camille Keaton conducted in 2009. She goes into detail about her filmography and her time in Italy. Apparently, she did some stunt work for Ewa Aulin too.

If you haven't seen it already, definitely check out the psychological drama "Madeleine... Anatomia di un incubo" since it features, in my opinion, one of her best performances in her career (it's also her favourite). Sadly, the film is still not available on DVD so you'll probably have to look for it online but it's definitely worth watching for the lovely Camille Keaton.

Thanks for the tip, Terence. I had missed this interview. I'm aware of MADELEINE but I've yet to watch it. It does sound interesting, though, and I'm sure I'll get around to it.